We read in old reference books that a Berlin Library Association was organized on February 1, 1882 to establish and maintain a library and reading room in the village. It owed its existence to the efforts of Mrs. Rachel H. Strong, the principal of the village school, and Mrs. Elizabeth Chew, one of the teachers, who were most active in the work. The association selected officers as follows: President, Joshua Burton; Vice President, Mrs. R. H. Strong; Secretary, Harry G. Smith; Treasurer, Miss Sara Collins; Librarian, Benjamin Read. The executive committee consisted of Joseph L. Thackara, Samuel S. Stokes, and Howard C. Sharp. 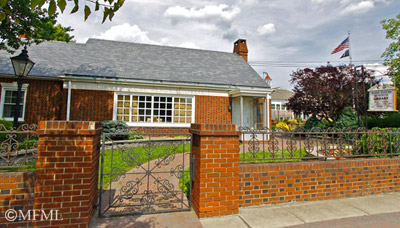 The library opened with a total of sixty volumes and was well patronized. In June 1886, the members numbered thirty-five and there were two hundred eighty books in the library, besides pamphlets and public documents. The funds for the support were realized by a membership fee of one dollar plus proceeds from lectures and entertainments. The books were housed in the chapel of the Methodist Church. Mrs. Strong was the leader in the movement and with her retirement and departure from the Berlin scene; the library seemed to fade into oblivion.

The New Jersey Public Library Commission was organized in 1900, and the “traveling libraries,” which were instituted in 1905, were a great boom to communities like Berlin. Fifty books were loaned at a time, and exchanged at intervals. Later petitions were circulated with the idea of forming a Camden County Library, and Mrs. Luther Jennings was active in circulating the petitions in this area. Finally, the Camden County Library was formed in 1921, Berlin Library became a branch of it, and Miss Cora Norcross was in charge of it until her death. The next librarian was Mrs. Jessie Hitchens, and she continued in charge for the next several years.

For a time the library was inactive, and it was due to the persistent efforts of Mrs. Doris Tweed that it was reopened in April, 1955 in a small room in the town hall. Membership the first year grew to 306, and 1269 books were circulated Mrs. Tweed continued as Director of the library until the new building was ready for use in 1957.

May 10, 1957 was an important date in the history of Berlin, New Jersey, for it was on that date that Lucien P. Fleche presented the deed of the Marie Fleche Memorial Library to its citizens at a public dedication ceremony. There is a story behind the gift. 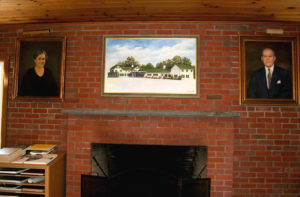 Mr. Fleche’s Aunt Marie, a native of France, came to America as a young woman and by her earnings made it possible for her twelve brothers and sisters to follow her to America, the land of opportunity.

It was her faith in him and with her support that her nephew, Lucien, would find his destiny in business in Berlin’s Lucien’s Old Tavern that inspired him to honor her memory. The gift of a library expressed his deep gratitude to his aunt and so the library was named “MARIE FLECHE MEMORIAL LIBRARY.”

Lewis P. Orchard had served as General Chairman of the Library dedication exercises and he and Mr. Fleche had invited a group of Berlin residents to form a Board of Trustees. From that group the following officers were chosen: Chairman – Lucien P. Fleche, Vice Chairman – Lewis P. Orchard, Secretary – Helen R. Brown, Treasurer – Warren Stafford. Other members of the Library Board were: William M. Matthews, Mrs. Esther B. Jaggard, Mrs. Anna Duncan, and Mr.Charles Duffin. Mr. Matthews shortly after installation resigned, and Mr. W. Earl Maier was elected in his place.

The Marie Fleche Memorial Library has had many wonderful dedicated directors over the years from its first Director Esther Reilly who served from 1957 to 1971, to our current Director Christine Flynn.

S. Samuel Lichtman, Berlin Boro Mayor 1968 to 1979 was instrumental in securing the funding through the Federal Community Development Block Grant Program for the addition of the children’s room, circulation area, and office. This grant was for approximately $100,000.00. The new space was occupied in 1982.

In the 1950s the population of Berlin Borough was approximately 3800, and in 2017 it is approximately 7800. The need for library services has continued to grow over the years. Today the Marie Fleche Memorial Library offers many children and adult programs and in 2016 over 20,000 people availed themselves of these services.

For many years the Marie Fleche Memorial Library operated as an association library, a member of the Camden County Library System which lent books, DVD’s and allowed Boro residents to use the library facilities and take part in library programs. A referendum vote in 2012 to separate from the County system and become a Municipal public library has allowed for great growth, building improvements, and service expansion to take place in the boro’s library. The library has an annual budget for its operation which is funded through a dedicated tax to the boro residents.

The Marie Fleche Memorial Library has been blessed over these last 60 years with a very active group of FRIENDS of the LIBRARY, at times numbering almost 40. The Friends have supplemented the paid staff donating countless volunteer hours and holding fund raisers. The Friends and Trustees have given thousands of dollars in scholarships to Berlin Boro High School graduates, as well as, donations for supplies, materials, and equipment. 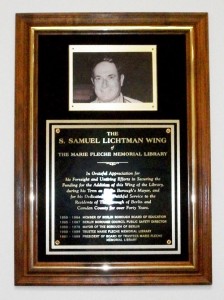 Millard Wilkinson, Jr. served as Berlin Boro Mayor, from 1980 until 2000, following Mayor S. Samuel Lichtman. During this period, with the growth of Berlin Community and the area, it became apparent that there was an increasing need for more library space. In the late 1990’s the Mayor and the Council evaluated options to further expand the library. The Simon Fisher Building, next to the existing library, was acquired and demolished to make way for future expansion. What that expansion would be was unknown at that time.

In 1988, a developer planned to raze the Historic Berlin Hotel, circa 1826, situated on the east end of the Berlin business district, to make way for a strip shopping center. Residents opposed to the plan formed a grass roots effort, and over 1,000 signatures to “Save the Hotel” were collected and presented to Council. The Hotel was saved from demolition. The building was then purchased by Christina and Joseph Hoffmann and Leonard Badolato who completed a three year restoration process earning them a citation from then Governor James Florio on behalf of the State of New Jersey in 1991 for their preservation efforts. The newly renovated hotel building was then opened as a restaurant. They were not willing to let it be knocked down in the name of progress.

During the late 1990’s, Mayor Wilkinson became aware of the fact that the Historic Berlin Hotel was to be torn down to make way for an Eckerd’s Drug Store (currently Rite Aid). This was not the first time the building was threatened.

The Mayor made contact with Eckerd’s top management in Sarasota, Florida concerning the Hotel. Further negotiations continued and finally Eckerd offered the following plan… “The owners could donate the building to the Boro of Berlin along with $110,000 from Eckerd to move the building to a new location.” After the Boro agreed to accept the building, and after many months of feasibility studies and planning, on March 28, 2000 the three story, pre-civil war building traveled several blocks along Main Street (Rt. 30) to its new location on the then-vacant lot next to the Marie Fleche Memorial Library. Mayor Wilkinson and Council worked to procure a Federal grant of $537,000 to repair damage sustained in the move, update and/or install new systems and to make the building suitable for use as a public building. In addition, the Long-a-Coming Historical Society under the leadership of their President, Roy F. Schmidt raised funds to help with the project. Roy, Former Councilman William Toy, Daniel Pomponio, Sr., and other members of the Society provided many hours of personal sweat equity in helping to make the beautiful building what it is today.

The Marie Fleche Memorial Library has now expanded into the Historic Berlin Hotel. The Berlin Lions Club paid for the connection between the existing building and the first floor of the Hotel. The walkway is named “The Lions Walk. The Marie Fleche Memorial Library now occupies the original 1957 building donated by Lucien P. Fleche, the 1982 children’s room addition, and the Historic Berlin Hotel.

During the last 136 years (1882 to 2018) The Berlin Community has been fortunate to have hundreds of dedicated citizens with a vision, and a commitment to the importance of our library. The Marie Fleche Memorial Library is committed to carrying out the wishes of its benefactor, Lucien P. Fleche that “THIS LIBRARY WILL BE A BOND FOR ALL PEOPLE TO USE IN EDUCATIONAL ADVANCEMENT, AND TO ENJOY IN GOOD HEALTH FOR ALL TIME.”

Ref: The History of Berlin, New Jersey Long-A-Coming by Charles W. Wright; History of the Berlin Library by Helen R. Brown; and personal accounts from individuals mentioned within this article.